11 Jun Creation of the James Brown Mural Has Started 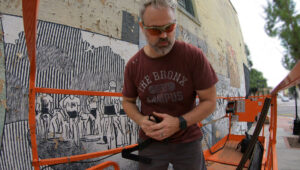 In March, after thousands of votes, Cole Phail from Appling, Georgia won the public’s vote in the James Brown Mural Competition with his piece titled “The Spirit of Funk.” Work on the mural, located at 879 Broad Street, in downtown Augusta, began Monday.

Phail will be documenting his progress on the mural, which is expected to take two months to complete. The Greater Augusta Arts Council and Visit Augusta will be sharing the mural’s progress with social media posts.

Phail said about his piece, “My hope is that the viewer will get the full impact of the life of James Brown with a casual viewing, but will be enticed to spend more time studying the details layered throughout.” For the design, he used a variety of art styles including realism, graphic, impressionistic, and packed his imagery with the lyrics of James Brown’s greatest hits.

The new public art has been made possible through a grant from the Augusta Convention and Visitor’s Bureau, with a matching fund component from the City of Augusta. In addition, through their in-kind investment to the All In Augusta campaign, Yancey Brothers has provided a scissor lift to be used in the work. Yancey Brothers, is the “Nation’s Oldest Caterpillar Dealer” and a Georgia company since 1914, Yancey Rents is the division from which the equipment rental was received. The mural project is administered by Greater Augusta Arts Council.