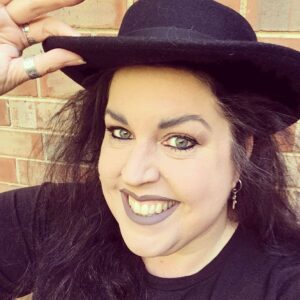 Francie Klopotic was meant to be an artist. Her gorgeous smile, her eye for details and a quirk in her brain that turns sound into color all combines together to make a warm, welcoming interdisciplinary artist that you just can’t help but feel drawn to.

Klopotic told us that as a child of the ‘60s artists like Peter Max, Andy Warhol, Yoko Ono and the Monkees were formative sounds from her youth. Her visual art centered around graphite portrait work that she finishes with watercolors and acrylics. She says her studio always has music playing and her sound-to-color synesthesia translates, literally, onto the canvas as she works.

“Trivia on why/how I taught myself to draw: I had discovered The Monkees in reruns in the summer of 1976 and I was desperate for pictures of them,” Klopotic said. “Since there was nothing available in teen magazines of the time for me to pin to the wall, I decided to make my own pictures by drawing from images on their album covers. And thus, a budding artist was born. Ha!”

When she’s not in the studio sketching out portraits, Klopotic is busy working hard at her full-time, environmental protection job or on one of her novels that she’s currently producing. 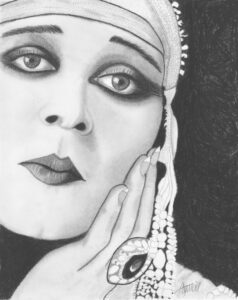 One of the books in progress is a joint venture with Stoney Cannon, Augusta local and Lokal Loudness founder, that is “an encyclopedia of bubblegum pop stars from the ‘50s through the ‘90s.” That book is currently in progress and projected to be finished by April 2021.

Even before quarantine measures went into effect Klopotic would have called herself a “natural homebody” working from home since 2013. But her art is a different story. Currently she has work hanging in New Moon Cafe in Downtown Augusta and also has her first solo show at 4P Studios in September 2020.

The show, “Phantasmagoria,” is a celebration of classic rock and pop culture from the ‘60s and ‘70s featuring her portraits of icons from that era, along with abstract mixed-media art.

“I was born in Decatur, raised in East Atlanta Village, and spent a lot of time as a young adult in Little Five Points,” Klopotic said. “The alternative scene has been a part of my life as far back as I can remember, starting with the hippies during the ‘70s. I grew up with friends from many ethnic backgrounds. Being exposed to a wide range of lifestyles and cultures was pivotal in my development as a young artist.”

In the (fairly near) future, Klopotic hopes to retire from her full-time job and turn her focus to her visual and written arts.