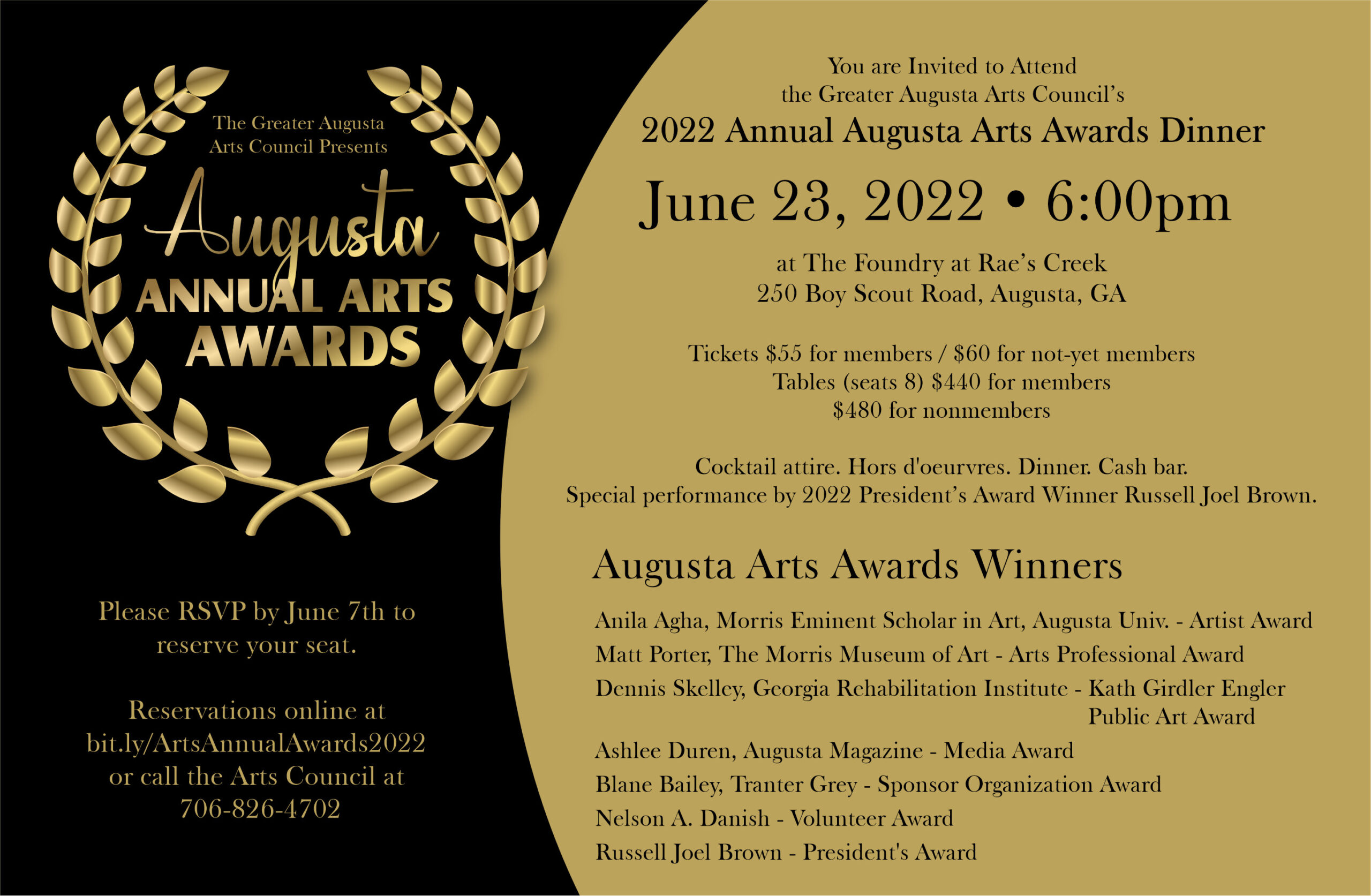 Posted at 17:24h in News by Rhian Swain
Share

Nominations were submitted by the public and the finalists chosen by a panel of local arts community leaders. The Annual Augusta Arts Awards dinner will be held on June 23 at 6:00pm at The Foundry at Rae’s Creek, 250 Boy Scout Road in Augusta, GA. Tickets are $55 for members or $60 for not-yet members. The event is cocktail attire and includes Hors d’oeurvres, Dinner, a Cash bar and a special performance by 2022 President’s Award Winner Russell Joel Brown. RSVPs are required by June 7th.

Reservations can be made online at https://bit.ly/ArtsAnnualAwards2022 or by calling the Arts Council at 706-826-4702. The Augusta Arts Award winners will be published in Augusta Magazine.

About the Award Winners:

Morris Eminent scholar of Art within the Department of Art and Design since 2020.

In the short time she has been at Augusta University, her artistic achievements and community engagement represent an exceptionally high level of achievement. She has used her international network of connections to bring high caliber curators and gallerists to our area. Since 2020 her artistic work has included exhibitions in major art museums, art fairs, art biennales and major publications.

Matt Porter came to the Morris Museum of Art more than 13 years ago, having gained a great deal of experience from his time on the education department staff at the Detroit Institute of Art and the historic Frank Lloyd Wright house “Falling Waters.” Under his leadership at the Morris, the museum has expanded its contemporary artist lecture series, broadened the performer base for its “Music at the Morris” concert series and renewed its emphasis on the importance of the visitor in the museum-going experience. At the museum, he has overseen the remarkable growth of such signature public programs as the “Social Canvas.” He has helped to expand the museum’s services to the community with new programs for the Boys and Girls Clubs, Hope House, the Jud C. Hickey Center, the Children’s Hospital of Georgia and many others.

Dennis Skelley has been instrumental in guiding, shaping, promoting, and sometimes forcing the growth of public art in Augusta.  He helped to draft the Public Art agreement establishing the Arts Council as the public art agency for the City of Augusta and has served as Chair of the Public Art Advisory Panel twice. Dennis promotes a clear vision of having public art along every major route leading from every corner of Augusta toward a downtown area that is now, largely thanks to his energy and commitment, FILLED with murals and sculptures. He has supported the creation of sculptures since 2005, when he was still at the head of Walton Rehabilitation Institute, as the driving force behind the creation of the “Healing Patience” sculpture.  He has assisted numerous artists in the creation of sculptures, from Kath Girdler Engler’s “Navigating History” right through an array of sculptures that populate his pocket park at 523 Thirteenth Street.  He has commissioned two murals on the GRI building and has convinced the board of GRI to fund three public sculptures, at the Augusta Canal, Phinizy Nature Center, and Twiggs Circle.

Ashlee Duren first began her work with the Augusta Chronicle as a junior columnist as an Evans High School Senior in 1994. In the new millennium she began work as a journalist working at the Columbia County Bureau under the Chronicle covering a wide variety of news features. She then moved into the marketing department, working with various promotional endeavors, which included organizing the annual Wrangler Family Fun Fest with vendors and entertainment at the Augusta Futurity. In 2015, Ashlee became a publisher of many works, including the Augusta Magazine, Augusta Family Magazine, Aiken Homes & Lifestyles Magazine, Athens Magazine and the Buzz on Biz publication. She has brought those magazines to an even higher level of quality through her extensive co-creativity with local photographers and writers, with whom she has the reputation for being a consummate professional in everything she does.

Blane Bailey with 20 years of marketing experience supports numerous Arts Organizations in Augusta including, The Greater Augusta Arts Council, The Augusta Players, Westobou, Miller Theatre, Augusta Rocks, the Morris Museum of Art and more! Blane to known to over-deliver on his promise, using his expertise to make community arts more visible and appealing to the public.

Many Augustan’s will remember Nelson Danish announcing community events on WJBF TV.  Retirement has not slowed him down, now in his 80’s he contributes to the Jewish Museum, volunteers at the Morris Museum of Art, and shares his knowledge of Augusta with Gary Dennis at the Jessye Norman School of the Arts and Millie Huff at Sacred Heart Cultural Center.  He is the quintessential supporter of all of the arts in the River District.

Russell Joel Brown impacts the lives of children and adults alike by supporting August area non-profits in raising much-needed funds. The Jessye Norman School of the Arts, Lucy Craft Laney Museum of Black History, Colton Ballet Company, and many others have benefited from Mr. Brown’s fundraising concerts and appearances. His one-man show, From Mozart to Motown sold out the 850-seat Imperial Theater 5 times, and recently sold out the Miller Theater. His tour de force performance as Coalhouse Walker, Jr. in “Ragtime” was the talk of the 2019 theatrical season.  Russell Joel Brown designed and currently serves as Director of Boys With A Future, a world-class after school program for inner-city boys (and a girl) in academic and life crisis in the Harrisburg area of Augusta. This program seeks to revolutionize this underserved area through education, the only sure way out of poverty and into a fulfilling and well-rounded life.