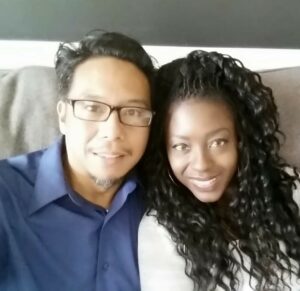 I had the pleasure of getting to know Arts Council member artist couple, Art and Jerrie Abdon, a little better this week. “Art the Artist” Abdon seems to be everywhere in Augusta, in person and online, and particularly online now that we live in the international world of Pandemicland. I see him live painting at nearly every event, and look forward to seeing what he has each year at Star Wars Reads Day. And since the start of social distancing and isolation from COVID-19 began, Art has been sharing his tips and tricks of the trade in live Facebook streaming events at https://www.facebook.com/art.the.artist.studios/.

So it was like a flash of lightning in my mind when I saw that Jerrie Abdon had been selected to have her piece From Our Back Porch hang in the Governor’s Mansion as part of the Art of Georgia IV: Imagining Home; Landscapes exhibition, some months ago. Jerrie is most known by her professional moniker, Ms. Serendipitous, the coach for your creative and organized home, and her blog https://msserendipitous.com is full of wisdom on how to make your house your home. I did not know she exhibited paintings. It turns out that Jerrie’s gorgeous, moonlit painting, From Our Back Porch, was the result of long pent-up energy waiting to burst forth.

Art and Jerrie are both from military families: Art-Navy, Jerrie-Air Force. They grew up all over, as military kids do, and they met in Okinawa, Japan. Jerrie’s family was stationed there, and Art had just enlisted.  They were both fresh out of high school, and they connected through their love of art. Jerrie was really into fashion illustration at the time, and Art was doing fun stuff, putting art on clothing. Their artwork caught each other’s eye, and the rest followed.

I don’t think I can do justice to the array of jobs that Art had in the military. He started in the Navy, where he was in the construction battalion, doing outdoor surveys and quality control during construction of Navy buildings and then he moved to architectural drafting, assisting the architects in planning those buildings. He completed service and then … joined the Army! In the Army, he began as an admin specialist, but moved into the position of Chaplain’s assistant, where he managed the logistics for setting up services and acted as body guard for the Chaplain.  But word got out that he was a gifted artist, and those higher up in command would commission him to design commemorative coins and posters to honor people within the military.

Art completed 23 years of service in total, and transitioned from military to civilian life in 2014 out of Fort Gordon.

All the while, Jerrie, who felt a little intimidated by Art’s artistry, decided to leave the pencils and paints to his domain, and embrace her knack for designing spaces that are therapeutically beautiful, and supportive of raising a healthy, happy family. Ms. Serendipitous is part interior designer, part life-coach, part parenting Auntie, but ALL wisdom. These days, with COVID-19 limiting her ability for in person visits, she is growing her online presence. No matter what she is doing; however, she is only happy if she is helping someone else and the work has meaning for her.

Even so, Art has always pushed Jerrie to pick up the paints again and start making something that comes from her heart, and isn’t an interior design commissioned piece. So, about a year ago, they placed a canvas on the kitchen table, and decided to make a family piece. Art would work on it, then Jerrie would, and then their daughter A’Shaela, also an artist, would walk past and add her visual voice. This family of artists often helps its members out, giving a little push when someone is feeling blocked, or seeking each other’s opinion on a piece in progress. While this was going on, on the kitchen table, Jerrie announced that she was going to make a piece by herself (one has to set those boundaries in the art-filled Abdon family) and set up her easel in another room.  When both pieces were done, Art submitted the family piece to the Governor’s Art of Georgia IV call, and then decided to take a photo of Jerrie’s piece and submit that too.

Lo and behold! It was Jerrie who got the email notifying her that her piece had been selected to hang in the Governor’s Mansion. She thought it was a mistake, but if you go take a look, you’ll see it was merely an excellent choice of a beautiful painting.

It was around this point in the conversation that I learned something I had NO IDEA of. Art the Artist Abdon is color blind! Art, in his own words, “works later in the evening”, which to be clear means 2 am. He’s been known to wake up whatever family member is closest, small children included, to ask them whether the tube of paint in his hand that somehow got the label worn off, is some kind of red, or some kind of green. The children are used to telling Dad what color things are. This comes most into play when he is creating representational work, such as portraits. The most challenging piece in recent times, according to Jerrie, was the painting he did of Yoda, because…that was a lot of green.

Art has a fascinating method in which he first creates a black and white line drawing of the piece he is imagining and then will make reproductions. Then, he paints over the black and white copies, creating different iterations of the piece, working out what kind of color scheme he feels is working best, then taking his favorite to completion.

This is a trick he teaches his students, along with many, many others. Art is a born teacher. He is always seeking new skills, and then immediately seeks to share them, never hoarding them to himself. Much like Jerrie, he just loves helping others, and that comes through in his open sharing of knowledge.

Art told me that the secret to his and Jerrie’s long and happy marriage has been partly their bond of love for art, and partly their bond of love for God. An integral part of his formation as a person was falling in love with someone whose spiritual background was from a different sect of Christianity than his own. He was raised Catholic, Jerrie Protestant. By realizing that they both found their spiritual truth along different paths, he grew as a person, and came to love himself, his wife, and the world more holistically.

What does the future hold for this incredible family?

Jerrie wants to have a better and bigger online presence. Grow her business, especially helping people through art as holistic practice. She wants to delve back into her art, and show and sell her work outside of her interior design business. But, she’s only happy if what she’s doing is helping someone else and has meaning.

Art is seriously delving into their house, getting into the basement and outdoor spaces, creating a personal resort. (I’m angling for an invitation once we’ve all been vaccinated.)  His focus is Art, Tech and Business.  Anything he does as a holistic artist will be learned for himself and then shared with others, whether online or face to face.

No matter what, this kind, creative couple will be sharing their love and artistry with the world.