The City Gallery, which is located in the lobby of the Augusta Richmond County Municipal Building, is managed by the Greater Augusta Arts Council. Each year, the Mayor’s Office, the GAAC and Lucy Craft Laney Museum of Black History hosts a black history exhibition which features images from the Mayoral Collection that include portraits of the Honorable Edward M. McIntyre, Augusta’s first African American mayor and photos of the Lenox Theater, the once the premiere movie and entertainment center for African Americans to name a few.

This year, the Arts Council has connected with the Golden Blocks Legends Comic book team to incorporate prints from their work on their first feature comic alongside the Mayoral Collection in the City Gallery from January 4th – March 1st. Titled POW! People of Wonder, this showcase will be a colorful and informative display of Augusta history as well as extending this annual Black History Month exhibition by several weeks to highlight the collaborative efforts of the team of writers and artists who made this Golden Blocks comic possible.

Showcasing Augusta’s African American history in a visible, central location such as the City Gallery, is incredibly important to our community as a whole. It is the Greater Augusta Arts Council’s mission to enrich the quality of life for citizens and visitors to the Augusta River Region by advancing vibrant, local cultural arts.

As part of this mission, the Arts Council continues to work closely with the Lucy Craft Laney Museum of Black History. In 2022, Historian Corey Rogers was invited to host tours of the Mayoral Black History exhibit in the City Gallery, which received many positive reviews. Corey works closely with the Arts Council in the Golden Blocks Project. You can find more on Golden Blocks tours here. 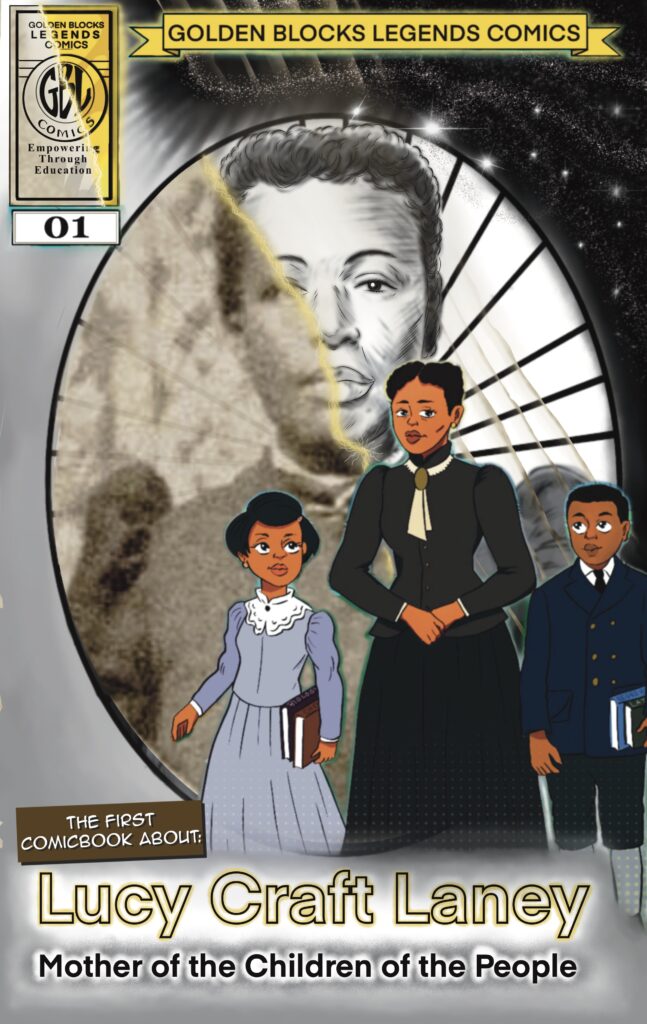 The Golden Blocks Project is an effort spearheaded by the Lucy Craft Laney Museum of Black History and the Greater Augusta Arts Council. Named the Golden Blocks Project, in reference to the historic nickname of the corridor of business and industry located on or near Campbell and Gwinnett Streets, this project will create new public art that references the historical and cultural significance of these areas. Today, Campbell and Gwinnett Streets are James Brown and Laney-Walker Boulevards.

The newest initiative centered around the Golden Blocks has been taken by several local agencies including the Lucy Craft Laney Museum, Richmond County School System, The Augusta University Literacy Center, AU’s Department of Art, Teaching and Leading, and The Dean’s Office, and The Hub. Their plans include a comic book illustrated by father-daughter-duo: Art the Artist Abdon and A’Shaela Abdon.

Individuals involved closely with the development of this new project came to the realization that there was a need for a literacy activity that celebrated the Golden Blocks for students in Augusta. Augusta University Professors Dr. Juan Walker and Dr. Kim Barker were originally planning create a curriculum around the Golden Blocks. Deciding to opt-out of creating another worksheet and opt-in to something a bit more engaging that might entice young readers to learn more about local history; centered around African American history in the Golden Blocks of Augusta.

The mission of the Golden Blocks Legends Comics is to serve school-aged children, university students, schools, and multi-generations of Augustans in the understanding and appreciation of the impact and influence of the rich history that includes the Golden Blocks era. In addition, they will serve as a model for others – regionally, nationally, and internationally.

They will also empower the community through education in a variety of settings. This project will foster pride and a deeper appreciation for the history and influence of GBL legends and of their era. The innovative texts and research-based teaching will lead to increased literacy engagement and positive academic outcomes. Ultimately, their work will forge enduring, impactful partnerships that continue to enrich the greater community.

The first in this series of comics will feature a story centralized around Lucy Craft Laney, titled “Mother of the Children of the People.” This will be followed by comics based off of the lives of John Tutt and T.W. Josey. The storyline follows friends Bianca and Si-Long who are magically are transported to another time in Augusta’s history through a quilt where they are able to meet Augusta’s legends.

We can all agree that comics have a special place in all of our hearts. In addition to the nostalgic qualities of a comic, there are a slew of research-based articles that support comics as a way increase literacy and as a tool to educate. The GBL comic series can easily be seen as a win-win situation for K-12 students and teacher candidates who need to know about and value the strengths of the community.

Future plans for this series may include several years of character’s and Augusta’s stories that have yet to be told in this new and inclusive way.

On February 24th from 10AM – 11AM, join us for a  FREE tour lead by Dr. Juan Walker and Corey Rogers in the City Gallery for the People of Wonder Exhibition in the City Gallery. POW! Will be featured from Jan 6th – March 1st as a perfect blending of historic images through the Mayoral Collection alongside the GBL Comic’s illustrative prints that highlight black history in Augusta, GA. You can find the announcement of these tour dates on the Arts Council’s gallery page when available. 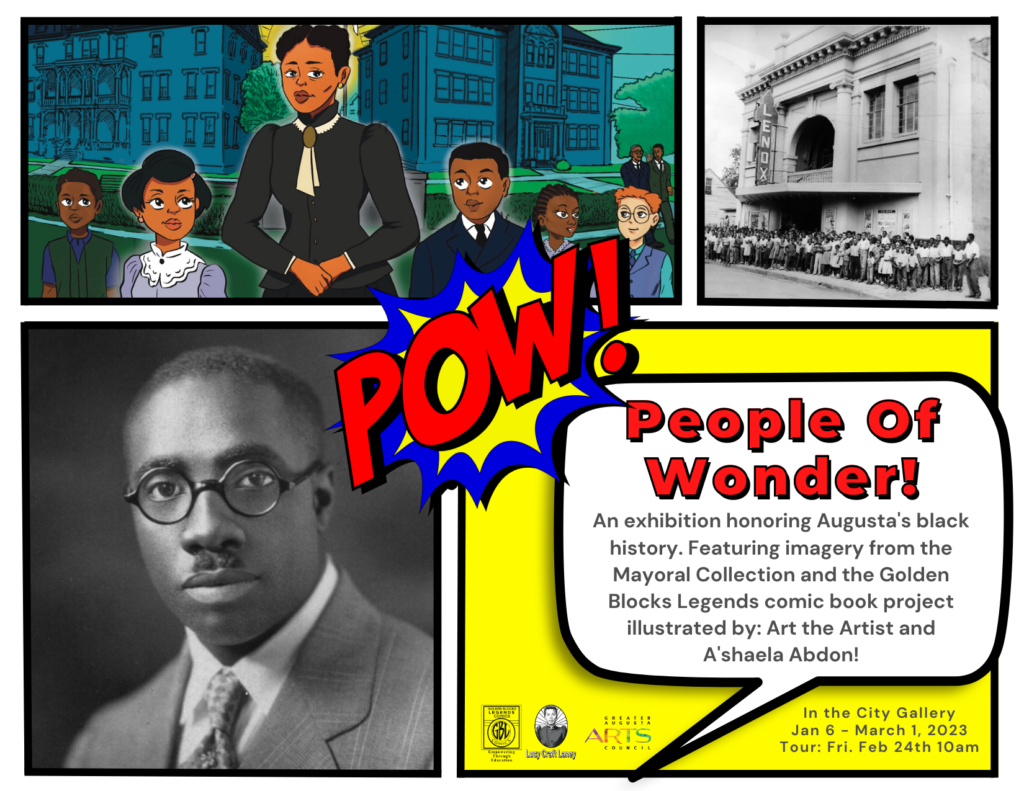